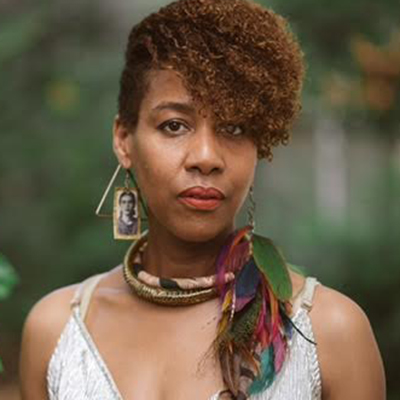 Gia M. Hamilton, cultural practitioner and serial entrepreneur, has worked at the heart of art, healing, food security and education to help build sustainable communities for the past 20 years. Hamilton, a native New Orleanian, received her Bachelor’s in Cultural Anthropology with a minor in Visual Art from New York University and her Master’s in Applied Anthropology from City University of New York.

Hamilton began her career in the corporate sector as a researcher and organizational design consultant with Downey Associates International, supporting financial and non-profit organizations like Citigroup, Hearst-Argyle and TIAA-CREF restructuring mergers and acquisitions and the impact on human relations.

Gia began observing and documenting the way communities formed and sustained themselves in the absence of equitable resources using ethnographic analysis and multimedia tools. In Brooklyn, she worked as a curator with self-taught contemporary artists and continued that practice in New Orleans through Gris Gris Lab, producing the Prospect 2 show, Invisible Man, at the George and Leah McKenna Museum in 2011 among other notable projects.

Hamilton developed “Social Magic” as an engagement tool for working with communities. Social Magic allows the community to effectively utilize and leverage resources and assets already present in their environment. To date, Hamilton has written for numerous publications including the Huffington Post, Come Bien and Education Revolution.

In 2011, Hamilton joined the Joan Mitchell Center  as a consultant and was appointed Director in July 2013. She comes to the Joan Mitchell Center as the designer of the artist-in-residence program, community engagement strategies, public programs and operational systems. During the past two years, Hamilton acted as lead director on the ground to implement the multi-million dollar, two-acre capitol re-development at the Joan Mitchell Center that involved historic renovation of six buildings as well as the new construction of LEED Gold 8,000 square foot studio building.

Hamilton sits on the board of Alliance for Artist Communities, Tulane University’s Newcomb Museum, and New Orleans Video Access Center. In 2015, in addition to her work at the Joan Mitchell Center, concurrently founded Afrofuture Society, an online platform for the arts community of African descent which provides opportunities for visibility and communication across discipline throughout the arts ecosystem.

Lastly, Hamilton co-curated the Atlanta Biennial in August of 2016 using an anthropological gaze of the southern region in the United States while referencing the global south. Hamilton works in New Orleans and continues to design programs and exhibitions through a number of multimedia platforms and [un]conference style gatherings across the country