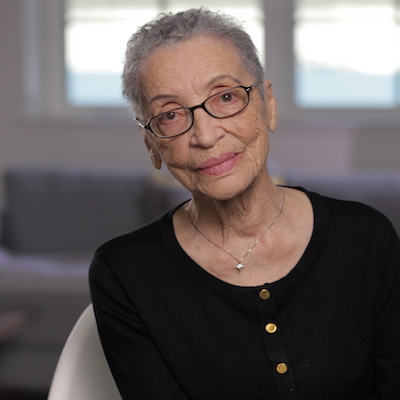 100-year-old Betty Charbonnet Reid Soskin is, among other things, America’s oldest active park ranger. Her skills as a storyteller have made her an in-demand public speaker, appearing on NPR’s The Moth as well as The Today Show, and CNN’s Anderson Cooper 360, among other influential radio and television programs. In 2018, she was named one of  Glamour Magazine’s “Women of The Year,” and in 2005, she was named one of the nation’s “Ten Outstanding Women” by the National Women’s History Project. In 1995, she was designated a “Woman of the Year” by the California State Legislature, and in 2015 was chosen to introduce Barack Obama at the annual Christmas Tree Lighting ceremony on PBS.

Born into a Cajun/Creole African-American family in Detroit in 1921, Betty spent her earliest years in New Orleans in the era of lynchings and Jim Crow segregation. Her distinguished life has included being an author, composer and singer, social and political activist, entrepreneur, mother, grandmother, and great-grandmother, historian, blogger, and public speaker. Betty was instrumental in the establishment of the Rosie the Riveter/World War II Home Front National Historical Park in Richmond, California, where she now gives presentations several times every week.

Along with her first husband, Mel, Betty helped integrate the East Bay suburbs by moving their family into a previously white neighborhood. Betty and Mel also founded one of the first Black-owned record shop businesses in California. After working with elected officials to rehabilitate the block on which the record shop was located, Betty served on the staff of a Berkeley City Councilmember and then as field representative to two members of the California State Assembly. In the 1960s and 70s, she was active in the Bay Area’s civil rights and Black Power movements, as well as the movement to end the Vietnam War.

Soskin’s reflections are aided by the fact that her great grandmother, a slave herself until the age of 19, lived until Betty was in her twenties. Soskin’s riveting commentary is directly informed then by over a century of her family’s and her own personal experience, creating her unique perspective on the extensive arc of civil rights from slavery through the Dred Scott Decision, the Civil War, the Emancipation Proclamation, Reconstruction and through to the Civil Rights Movement, the Black Panthers and Black Lives Matter.

Betty’s incredible life was chronicled in her acclaimed 2018 memoir and audio book, Sign My Name to Freedom. With A Lifetime of Being Betty comes a memorable portrait of a remarkable woman and of a lifetime filled with joy and pain taken directly from her powerful live presentations. In 2020, the documentary film No Time to Waste was released, chronicling her years of service at Rosie the Riveter. Her blog, CBreaux Speaks, has thousands of followers.