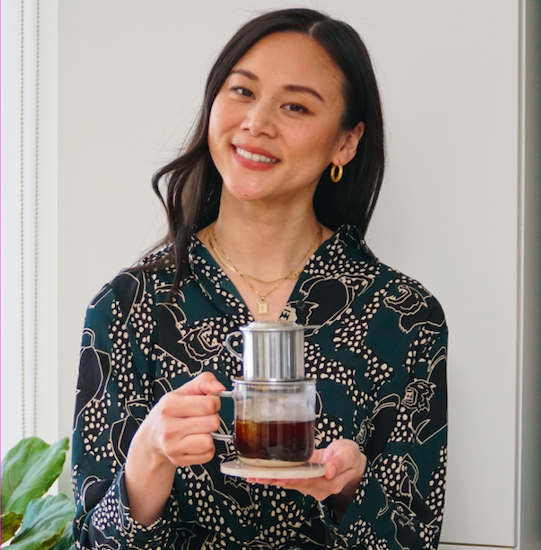 Sahra Nguyen is an award-winning filmmaker, entrepreneur, and founder & CEO of Nguyen Coffee Supply. On a mission to transform the coffee industry through diversity, inclusion, and sustainability, Nguyen Coffee Supply has been featured in the Wall Street Journal, VICE, New York Magazine, New York Times, Forbes, Fortune, and honored with the 2019 StarChefs Rising Star Award.

Early January 2020, Imbibe Magazine featured Sahra Nguyen as one of the #Imbibe75 — people, places, and directions that will shape the way you drink in 2020. In Spring 2020, she was selected to join the Gold House Collective as a Founder in their Food & Beverage cohort, a leading network to celebrate and elevate the Asian American community. In July 2021, Food & Wine featured Nguyen on the cover of their “Game Changers” issue — among 25 people and companies changing the way we eat and drink. This was the first time in 7 years Food & Wine has featured a person on the cover and the first time in 40 years they’ve featured an entrepreneur. Her explosive brand and company mission has caught the attention of everyone from Mindy Kaling to Tory Burch, including drinking coffee with Drew Barrymore on her nationally televised show!

In 2018, Nguyen launched Nguyen Coffee Supply—the first specialty Vietnamese coffee company importing directly from the source & roasting in Brooklyn, New York. Historically excluded from the specialty coffee industry, Vietnam is the second largest coffee producer in the world. Nguyen’s mission is to diversify the coffee industry, increase the visibility of Vietnamese producers and transform the landscape through sustainable coffee farming. She works directly with a fourth-generation Vietnamese coffee farmer from Da Lat in the Central Highlands, whose beans are certified clean and organic in Vietnam. As the daughter of Vietnamese refugees in Boston, MA, the company’s name is a nod to Nguyen’s Vietnamese heritage.

Nguyen graduated from the University of California, Los Angeles (UCLA) with a double major in Asian American Studies and World Arts & Cultures, served as the Director of the Writing Success Program at UCLA, has worked in non-profit youth arts, grassroots organizing, and freelance journalism.

Building on her love of storytelling and activism, in 2015 Nguyen first self-produced a documentary web series, “Maker’s Lane,” which later evolved into a brand new series for NBC News entitled “Self-Starters,” a show about Asian American entrepreneurs around the country. Helping launch the video channel for NBC Asian America, “Self-Starters” was nominated for the EPPY Awards and LA Press Club Awards.

In mid-2016, Nguyen sold her second documentary series to NBC News, “Deported,” which follows the grassroots fight to end deportation of Cambodian-Americans from the U.S. to Cambodia. “Deported” was nominated alongside CNN’s Lisa Ling’s “This is Life” and won the 2018 NAMIC Vision Award for Best Digital Media, Long Form.

In 2019, Nguyen co-produced “We Gon’ Be Alright,” a digital series through Indie Lens Storycast examining race and resegregation in American through housing, pop culture, education, and activism. The series was based off the book of the same title, by award-winning author Jeff Chang, and directed by Bao Nguyen.

Nguyen’s last documentary, “Made by Refugees: 40 Years of SEARAC” celebrates the 40th anniversary of the Southeast Asia Resource Action Center’s (SEARAC) 40th birthday by going behind the scenes at the organization’s 20th anniversary Leadership and Advocacy Training. The short documentary takes a look at SEARAC’s role in addressing the opportunities and challenges for the Southeast Asian American movement toward equity.

Currently, Nguyen is full-time building Nguyen Coffee Supply, which ships to customers in all 50 states.

Her expertise is in diversity & inclusion, sustainability, entrepreneurship, startups, and social impact business and she can speak on any of those topics and their intersections.