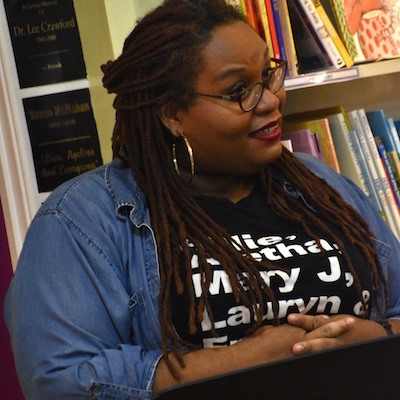 Susana Morris is co-founder and contributing writer for the popular feminist blog, The Crunk Feminist Collective. Together with Brittney Cooper and Robin Boylorn, Susana edited The Crunk Feminist Collection (The Feminist Press, 2017). Writing as “Crunkadelic” on the CFC blog, she covers a range of topics, including body positivity, politics, pop culture, race, and self-care. She covered those same topics in her first book, Close Kin and Distant Relatives: The Paradox of Respectability in Black Women’s Literature (University of Virginia Press, 2014).  A former women’s issues expert for About.com, Susana’s work has been featured in Gawker, Cosmopolitan.com, Ebony.com, and Longreads, among other venues. She has also appeared on NPR and HuffPost Live, and has been featured in Colorlines and ESSENCEmagazine. Susana is also an associate professor of Literature, Media, and Communication at the Georgia Institute of Technology.