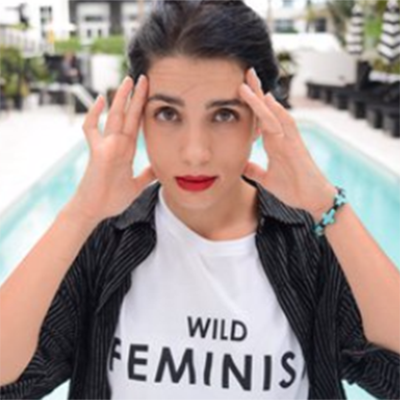 Nadya is a conceptual artist and political activist from Russia. She is the founding member of the art collective Pussy Riot, which has been one of the world’s most recent prominent art groups, aiming to focus attention on human rights violations at home and abroad. In August 2012, she was sentenced to 2 years’ imprisonment following an anti-Putin performance by Pussy Riot in Moscow’s Cathedral of Christ the Saviour. This protest attracted international media attention and support from the likes of Peter Gabriel, Sir Paul McCartney, Madonna, Bjork and Aung San Suu Kyi. Shortly after Nadya’s release in December 2013, she helped open an independent news service and media outlet, Mediazona. She has spoken before the US Congress, British Parliament, European Parliament and has appeared on stage with world leaders, including Bill Clinton. Nadya is a Lennon Ono Grant for Peace recipient, has appeared as herself with President Frank Underwood on season 3 of House of Cards and performed the Pussy Riot song “Refugees In” as part of Banksy’s Dismaland exhibition.

Topics/Agenda:
In Nadya’s 60min talk she can discuss topics ranging from the political landscape to the socially conscious to how one can be an activist. The talk can begin with an introduction to Pussy Riot – what it is, it’s intention, what it’s become, and what it stands for. She can speak about feminism, politics, the results of the election, and more. In addition, if desired she would be happy to discuss her creative process, including songwriting and how she created her latest music videos (Straight Outta Vagina, Orangs, and Make America Great Again). She can speak freely, or it can be a moderated Q&A.
Key Points:
• How can you turn an awful political situation into an opportunity for empowerment?
• Why are populist politicians taking over? Can we find a healthy alternative for neoliberal versions of globalization?
• Pussy Riot says the future belongs to non-governmental organizations like ACLU & Planned Parenthood – how so?
• What defines an artist? How Nadya created art and undertook political action when she
was in prison.
• 10 similarities between Russian & American prison systems & 5 facts to know before
you go on a hunger strike