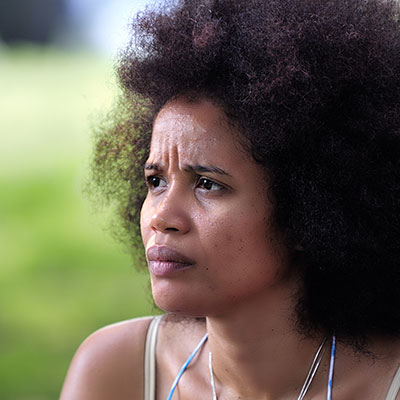 Jamaican-born Staceyann Chin is a writer and activist best known as a co-writer and original performer in Russell Simmons’ Tony Award-winning Def Poetry Jam on Broadway, for which she received a 2003 Drama Desk award. She is currently the Poet-in-Residence at The Culture Project. She has spoken and performed at universities across the country including NYU, Princeton University, Harvard University, Cornell University, Yale University, UC San Diego, and The University of the West Indies. She has also had her work featured around the world, including in Sweden, London, Denmark, Germany, New Zealand, and Jamaica.

Chin’s first one-woman show, Hands Afire, ran for ten weeks in 2000 at the Bleecker Theater, where she also performed her second show, Unspeakable Things, in 2001. In 2005, her show Border/Clash opened to rave reviews from The New York Times and ran for three months.

In 2009, Scribner published her memoir The Other Side of Paradise. Her work has also been in ESSENCE, Jane, The New York Times, The South African Times, and many other publications. Her poetry has been included in numerous anthologies, including Skyscrapers, Taxis, and Tampons, Poetry Slam, and Bullets and Butterflies. Staceyann was the recipient of the 2009 New York State Senate Special Human Rights Award, the 2008 Safe Haven Award from Immigration Equality, the 2008 Honors from the Lesbian AIDS Project, and the 2007 Power of the Voice Award from the Human Rights Campaign. In 2006, she was nominated for the GLAAD award for Outstanding New York Theater: Broadway and Off Broadway, and in 2007 she was selected by the Center for Women and Gender at Dartmouth College for the Visionary-in-Residence Award. In December 2015, she opened MotherStruck! at the Lynn Redgrave Theater at Culture Project. The Off Broadway show was written by Staceyann and directed by Cynthia Nixon.