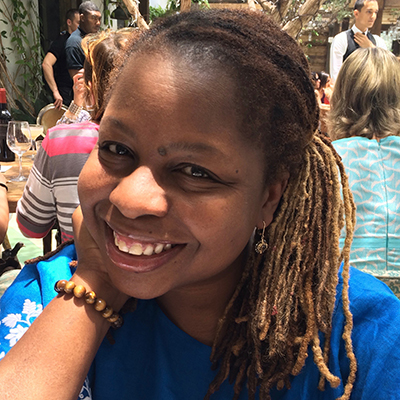 Veronica Chambers is a prolific author, best known for her critically acclaimed memoir Mama’s Girl and the New York Times bestseller Yes Chef, which was co-authored with Chef Marcus Samuelsson. In 2015, Veronica and Marcus published a young adult version of Yes Chef called Make it Messy which Barnes and Noble named one of their best teen books of the year. In May 2016, Random House published 32 Yolks, the memoir Veronica co-authored with celebrated chef Eric Ripert, which became Veronica’s fourth New York Times bestselling collaboration. Veronica’s best-selling collaborations also include Everybody’s Got Something with beloved GMA host, Robin Roberts; and Wake Up Happy with award-winning GMA host and NFL Hall of Famer Michael Strahan, as well as Emperor of Sound with multi-platinum producer Timbaland.  A passionate home cook, Veronica top-edited the food pages at Glamour and wrote Glamour’s best-selling cookbook, 100 Recipes Every Woman Should Know.

She has taught writing at Bowdoin College, Rutgers University, and the Out of Binders conference in New York. She is currently a JSK journalism fellow at Stanford University.

Born in Panama and raised in Brooklyn, she writes often about her Afro-Latina heritage. Veronica’s personal book projects reflect her curiosity, her passion for travel, and her love of children and children’s literature. Her non-fiction books include Kickboxing Geishas: How Japanese Women Are Changing Their Nation and The Joy of Doing Things Badly: A Girl’s Guide to Love, Life and Foolish Bravery.

She’s been a top editor at The New York Times Magazine, Newsweek, Glamour and Good Housekeeping, among other magazines.  As a director of brand development at Hearst, she was part of the executive team that led the relaunch of Good Housekeeping and Goodhousekeeping.com.  She then took her entrepreneurial brand of journalism to Conde Nast, where she developed and launched Glam Latina. A year later, she developed and launched Women’s Day Latina at Hearst.

Veronica has also written more than a dozen books for children, most recently the critically acclaimed Celia Cruz, Queen of Salsa and the body confidence young adult novel Plus. In May 2017, she published The Go-Between, a young adult novel about teens, race, culture and class in Los Angeles. In 2014, Veronica Chambers and her husband, Jason, launched the Loud Emily scholarship, which provides full tuition for two girls to the Willie Mae Rock Camp for Girls in New York. A graduate of Bard College at Simon’s Rock, Veronica and her husband have endowed three scholarships at the college in the fields of music and literature.

She has been the recipient of several awards including the Hodder fellowship for emerging novelists at Princeton University and a National Endowment for the Arts fiction award. In early 2017, St. Martin’s Press published The Meaning of Michelle, a collection of essays about Michelle Obama, edited by Veronica. She speaks, reads and writes Spanish, but she is truly fluent in Spanglish. She currently lives with her husband and daughter in New York.